Torchwood coming back for a Fifth season… sort of

While Starz royally screwed up Torchwood with its Miracle Day incarnation, many of us still wanted to go back to the world that spun off of Doctor Who. Well, it looks like we’re making another trip! 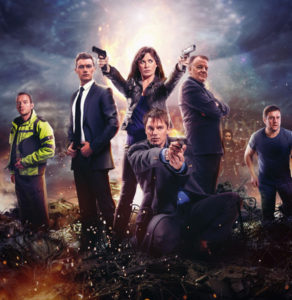 Torchwood: Aliens Among Us is a direct sequel to Miracle Day, and picks up soon after the TV series ended. Miracle Day featured series protagonists Captain Jack (John Barrowman) and Gwen Cooper (Eve Myles) as they solved the mystery of humanity’s sudden inability to die. AAU brings the two back together as they reform Torchwood in Cardiff with a new team to investigate why the city is suddenly falling into chaos.

Russell T Davies, creator of Torchwood and one time Doctor Who showrunner, lent his creative thoughts on the series, so that at least it will fit in with the predecessors more accurately.

Though it’s not a full show, it could reignite fandom for the series, especially with the popularity of the Doctor Who spinoff Class growing.

Torchwood: Aliens Among Us will be divided into four chapters and debut in August.